If you could win an Olympic medal, which would you prefer – the silver or the bronze? Now, of course, many of us would want to win the gold, but when they asked a group of Olympic medal winners which of the other two they would prefer winning, the results were surprising. Many of us would assume the silver would be the preferred choice. Being second best would seem like a good thing and a high honor. But in fact, that wasn’t the case. The survey found that the bronze medalists, the ones who came in third place were found to be happier than the silver medalists who finished in second.

The former Olympians explained how they felt about their medals. The third-place winners were thrilled just to have won a medal. To get on the podium was considered an accomplishment. But to those who won a silver, finishing second made them feel like losers because they didn’t win. They came close, but didn’t win…

In a sense, how the athletes responded to their achievement depended on their perspective. As a nation, Canadians are pretty happy when their athletes receive medals, especially in events we are not particularly strong in (hockey is probably the one exception). Athletes from other countries, like the United States, in particular, feel a deep sense of failure because they didn’t achieve their ultimate goal – the gold!

I saw a “Peanuts” comic strip where Charlie Brown, Lucy, and Linus are lying on a hillside looking up at the clouds. Lucy comments about using one’s imagination to see images in the clouds. She asks Linus what he sees. Linus responds, “They look like a map of the British Honduras on the Caribbean. Another cloud looks like the painter, Thomas Eakins and the other ones are like when Stephen got stoned and I can see the apostle Paul off to the side…” Lucy then asks Charlie Brown who responds, “Well, I was going to say I saw a ducky and a horsey – but I changed my mind.” 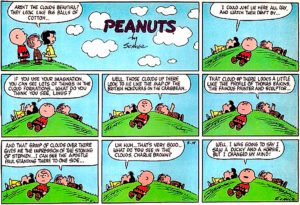 There are a lot of things that cloud our perception – judgment, jealousy, anger, legalism… each one shades how we see things. We all perceive the world in our own unique way. Our eyes may be fixed on the same thing, but our interpretation might be different.

We see this in how movies are reviewed. Critics may pan a film, but you might go and see it and discover it might be the greatest film ever made. Within the church, the same can be said when we look at the Bible. For some, a verse’s meaning might be simple but to another, it might be complex and the total opposite of how you see it. That is why denominations exist.

How many times have we clashed with someone because we didn’t see eye to eye? Husbands and wives quarrel with each other because they view issues differently. Employees and bosses can’t agree on wages and benefits. The most obvious place to see this is the political realm.

Perspective is created when our hearts and eyes exchange information. Although we see with our eyes, we perceive with our hearts. Jesus said in John 12:40 (quoting Isaiah), “He has blinded their eyes and hardened their heart, lest they see with their eyes, and understand with their heart, and turn, and I would heal them.”

The attitudes that fill our hearts form the glasses through which we view our world. We don’t see things alike because we all wear different glasses. If we were all in a room wearing various colors of sunglasses and all looking at a white piece of paper, we would each come up with a different answer. The person wearing the pink glasses would say the paper is pink. The person with yellow would answer yellow. This would leave everyone arguing what the true color is.

The same principle applies with how we see life. Wrong attitudes and experiences color our perspectives so we see things in a tainted way. Until we take off our glasses, we will continue to see things as they aren’t. We are merely fooling ourselves into thinking we see correctly.

Healthy eyes require a changed heart. If perception is based upon information interpreted by the heart, then that’s where the change needs to be. Ezekiel 36:26 says, “And I will give you a new heart, and a new spirit I will put within you. And I will remove the heart of stone from your flesh and give you a heart of flesh.” When we have a new heart, we are able to perceive things properly. Ezekiel goes on to say that God will put His Spirit in us…”

So, if you find yourself at odds with those around you, maybe you need a checkup? Is your heart renewed? Are your eyes clear? The Spirit of God, the “Great Physician,” is ready to help. Turn to Him. Seek Him and He will restore you and give you a right perspective on life and eternity.